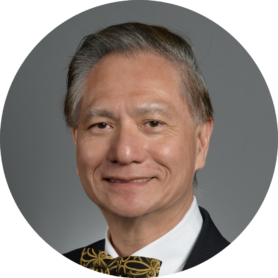 Dr. Yeh graduated from the University of California, Berkeley with a major in Biochemistry and received his medical degree from the University of California, Davis.  He completed medical residency at the Boston VA Medical Center and did a post-doctoral fellowship in the laboratory of Nobel Laureate Baruj Benacerraf at Harvard Medical School.  In 1987, he was appointed Assistant Professor of Medicine at the Massachusetts General Hospital and Harvard Medical School. In the early 1990’s, Dr. Yeh relocated to Houston to join the faculty of The University of Texas and the Texas Heart Institute.   In 2000, he founded the Department of Cardiology at The University of Texas MD Anderson Cancer Center and developed a new field called Onco-cardiology that specializes on caring cancer patients who developed heart problems caused by cancer therapy. He was recruited to the University of Missouri at Columbia as Chair of the Department of Medicine and Director of the Center for Precision Medicine in 2016.  In three years, he raised the department’s national ranking in NIH-funded research from 98 to 76.  In 2020, he was appointed Chairman of the Department of Internal Medicine at the University of Arkansas for Medical Sciences and Nolan Family Distinguished Chair in Internal Medicine.